Situated as it is between the sea and the mountains Waterville offers a selection of walks to appeal to all levels.  Maps and information can be provided by your hosts at Klondyke House.  Short walks would include Waterville -Waterlilybay - Waterville, or Waterville - Hogs Head -Waterville.  Longer walks include the famous Kerry Way walking from Waterville to Caherdaniel and chosing either the relatively simple low road or the more demanding high road.  Click here to view Walking Advice for the Kerry Way

Why not take stay and play at the famous Waterville Golf Links, ranked 36th in the top 100 golf courses in 2014. Tee times can be arranged by your hosts and the transfer time is just five minutes.  Well the legendary Mark O’Meara said it best after practicing here, “Waterville helped me realise the dream of a lifetime - victory in the Open Championship the following week.”

Ultimate Hole 2: The 7th is a terrific par 4. Doglegging to the right, it requires a tee-shot played to a fairway framed by dunes and an approach into the prevailing wind to a well-protected green.

"Where Champions Tread and Where Golfers Embrace Perfection"

Opened in April 2006 Skellig Bay Golf Club is fast maturing into one of Kerry’s must play courses. Located in Waterville the course could only be described as a headland layout as neither links or parkland best describe this stunning setting.

Designed by the Irish American course designer Ron Kirby, formerly of Jack Nicklaus design and whose previous design work in Europe includes The Old Head of Kinsale, Mount Juliet and The London Club. Kirby is somewhat of a traditionalist when it comes to course design and is an advocate of visibility, fairness and enjoyment.

As with all coastal courses there is little to protect the golfer from the sea breeze that is ever present, so mastering the knockdown shot and the bump and run will stand you in good stead here. Remember “in the breeze, swing with ease"”.

Generous fairways but small, generally flat greens put an emphasis on club selection with the second shot, and if missed a good short game is required to save par.

Your hosts will assist you in arranging green fees and tee times.

Where Lough Currane meets Ballinskelligs Bay there are plenty of opportunities to try your hand at fishing.   Strand fishing is a great challenge and can be organised through your hosts. Alternatively you may wish to do some deep sea fishing and boat trips can be arranged on site.

Designated a UNESCO World Heritage Site in 1996 in recognition of its outstanding universal value the Skelligs are a short trip from Klondyke House and a boat trip to view the Rock can be arranged with your hosts.  Located at the western edge of the European landmass, Skellig Michael was the chosen destination for a small group of ascetic monks who, in their pursuit of greater union with God, withdrew from civilisation to this remote and inaccessible place. Some time between the sixth and eight centuries, a monastery was founded on this precipitous rock giving rise to one of the most dramatic examples of the extremes of Christian monasticism.

And it was here in July 2014 that an exclusion zone of two miles was set up around Skellig Micheal as J.J.Abrams filmed a portion of the new Star Wars Film 'The Force Awakens' which is due for release in December 2015. 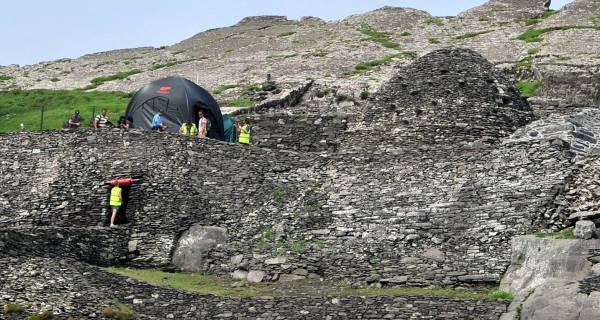 As one guest remarked on Tripadvisor

Skellig Michael was, without a doubt, my favorite experience in Ireland. It isn't for the faint-hearted or those prone to sea-sickness. Adventurous spirits only. Lots of wonderful, old stone steps exposed to the heights. Breathtaking views and history. I only wish we could spend a whole night there to experience the full island. We took a boat from Ballinskelligs. Definitely not a luxury cruise and you need to be prepared to board a boat that's bouncing in the waves. The stairs might not be the place for unruly children...?  Christopher T, Eustis Florida 16th January, 2015